KEEPING UP THE FILIPOFF TRADITION

These sturdy log walls have witnessed many a lively Karelian conversation and given shelter to all manners of trade – from an old-fashioned general store to cars, iron nails and alcohol.

In this house, joyful chatter in true Karelian style has echoed and its sturdy log walls have given shelter to all manners of trade – from an old-fashioned general store to cars, iron nails and alcohol.

Mr Jakob Filipoff commissioned the building work of the elegant house and store at Torikatu number 10 in 1862. Mr Filipoff, originally hailing from Impilahti and famous for his jolly and good-natured character, did not stand haggling over prices. His generous nature is demonstrated by the fact that he gave regular financial support to the small Russian orthodox parish in Joensuu.

During decades, customers from near and far visited Mr Filipoff’s general store. They came for fresh fish, the famous Filipoff salted meat and riding equipment to name only a few of the variety of items on offer.

Times and trade were changing, however. In the 1920s, the house was a popular hardware store complete with a fuel dispenser on the corner outside. After the prohibition was abolished in 1932, the first store to sell alcohol in Joensuu opened its doors in the house of Mr Filipoff. It has been said that on the day of the opening, around 200 people had eagerly gathered to queue outside the store.

The last business occupant of the premises was a second-hand store. Later along the years the buildings on the block sadly fell into disrepair and were even occupied by local activists in the 2000s for a brief period of time.

”We want to be a part of the revival of this neighbourhood, to bring joy and happiness and enjoy it together.” 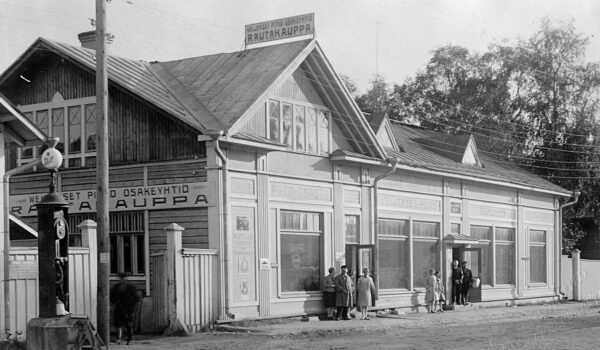 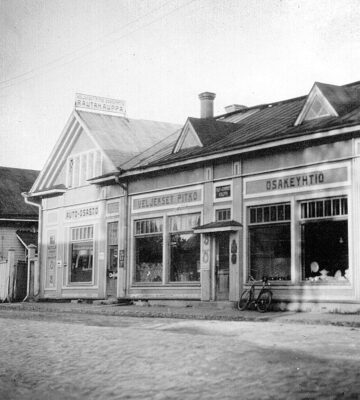 Footsteps are clattering against the floorboards again

Eventually the Joensuu-based real estate business Korttelinkulma came to the rescue of the buildings and saved them from being torn down. The renovation of the wooden buildings on the block started in 2016 and four years later the scaffolding has come down and revealed a carefully renovated, beautiful house of Filipof complete with large windows.

Every morning when Tiia Tahvanainen, the entrepreneur at Restaurant Filipof, steps into the bright and sunlit restaurant space, she feels that she is continuing the Filipof story, and it makes her feel good and grateful. Fresh ingredients are arriving from local producers, the staff members are smiling and saying good morning. Along the day a happy and lively murmur of conversation fills the rooms again, just like in the days of old Mr Filipoff.